On Saturday, I was privileged to be part of a mission to the village of Rutare in the south eastern corner of Rwanda. It was literally a few minutes walk from both Burundi and Tanzania. The purpose of the mission was partly to follow up and evaluate the progress from a previous mission to Rutare, but it was also part of an effort of our mission to initiate a Global Prayer Movement for Rwanda. The Bible studies for the day were to emphasize that God wants us to prayer for our neighbors and others that do not know Christ. While the classes were going on, two groups did some 'prayer-walking' through the village, praying for the community and for those meeting at the local church. The Result: the leaders of the church poured out their voices and their hearts in confession to God that they had been neglectful in not praying for their community and sharing their faith with their neighbors as they should have. We may look back in years to come and say that the Global prayer movement for Rwanda began last Saturday in the village of Rutare!!! 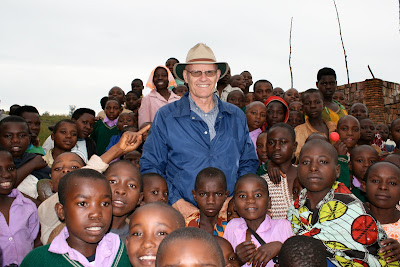 I have never been the greatest worker with little children, but there was no way to avoid it at Rutare. Jesus said, 'Allow the little children to come to me, for of such is the kingdom of heaven.' Pray no only for the children of this village, but also that the adults will have the child-like hearts needed to receive the kingdom.
Posted by Sam and Nancy Shewmaker at 3:22 PM

What a blessing to see you surrounded by little children....the next generation!!