God is been very gracious to me today. Brothers in Togo helped me get a Togo visa extension and a transit visa for Ghana all in one day. They say that is quite rare, but again God intervened to make my trip arrangements work out so that I could get into to Ghana and catch my return flight home tomorrow night. 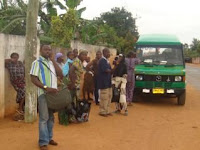 Then on the way from the Togo border this afternoon on my way toward the Ghana capital of Accra in a little local bus with about 12-15 other passengers, we were passing through a small town at about 60 kilometres an hour when the brakes on the bus failed. The driver, in order avoid hitting a stationary car swerved off the street to the right narrowly missing the car, ran between two large logs just about a car-width apart. The driver maintained controlled of the bus while the front and back right wheels dropped into a drainage ditch. He managed to keep the bus from rolling over and then veered up and out of the ditch. The bus rolled to a halt 150 yards on down the street. No cars, buildings or people were hit and there were no injuries in the bus. It was surreal. Everything happened so fast, no one even screamed. It was as if this was normal driving that happened every day. After repairs were done, we were back on the road in one and half hours.

I cannot remember when I have been this close to being in a car wreck. I was sitting in the right front passenger seat and of course there were no seat-belts in the bus. Thanks be to our merciful God for his protection over what could have been a terrible accident.

Sam
Posted by Sam and Nancy Shewmaker at 5:39 AM No comments: