A Time to be Sick and a Time for Healing

As of last Saturday evening, we are now back in Kigali, Rwanda. Most of you have been following the details about my health, so I won't bore you by repeating all that.

Suffice it to say that I went to several clinics and saw 5 doctors here in Kigali, had quite a bit of testing at each one, with no clear diagnosis. Honestly, we began to wonder if we would be able to find the needed answers here and we made a pretty quick decision to get to what we thought would be better, more sophisticated health care, after realizing that I had dropped more than 20 lbs in about three weeks time. It turned out that the two hospitals we went to in South Africa were not able to find anything either. What they did do in their testing was to rule out some bad stuff like hepatitis, tuberculosis, cancer, bacterial infections and parasites.

I think it was one of the examples of God's unexpected will and timing that Duane Jenks and Don Box were able to change their flight schedule to stopover with us in Pretoria on their way to Durban to visit and comfort Brother Johnson Ngoyo who lost his wife and his oldest son on the same day. D and D were able to meet with some of the leaders of the Seeiso Street church and Duane did a class one evening on spiritual warfare. This really struck a chord and they want him back for a full seminar. 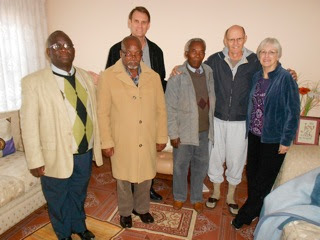 One of the great joys I experienced during my illness was the beauty of Christian fellowship. Numerous people came by to visit, to pray and to sing. One woman was baptized in the bathroom next to our bedroom. Afterward she came in to introduce herself to us and bid me good health.

On July 15, our 45th wedding anniversary, I felt a little better and we think that was the turning point. Each day thereafter, I felt a little stronger and was able to walk farther, gradually my appetite started returning. On Tuesday, July 19, I was finally able to see a specialist who declared me clear of anything they could identify, and closed my file. In the end, the specialist concluded that the culprit was some unidentifiable virus that had run its course.

On the following days we took time to see more of the kingdom works in the area. Brother Machona took us to see ministries in the Pretoria area, the Downtown church which also houses the Gospel Chariot Mission, which we had become acquainted with years ago. They now have two big specially designed trucks with trailers that they do teaching and preaching campaigns and distribute Christian literature in 11 southern African countries. This church also hosts students preparing for online courses with Nations University. On another day Machona and Tebego took us to one of the youth detention centers where some of the leaders of the Seeiso street do New Life Behavior and other training courses. One of the sisters who helps organize their short-term medical missions obvious has considerable means. The last afternoon we were there, she took us around to her congregation and showed the properties she is personally investing in for kingdom projects, one for the church, one for a women's center another for a Christian kindergarten and elementary school. 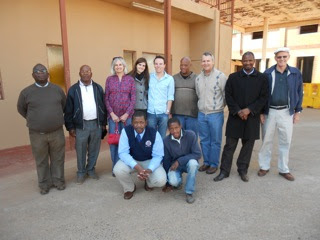 Tebogo is the main organizer for many of their mission activities and he is getting a lot of demand to speak at different churches who are interested in becoming involved in missions. I really feel like the Lord used our time in Pretoria to add to what Phil Jackson and I were able to do in March; to continue building relationships between MRN and the churches in the area for the future of missions.

Before I got sick I had been planning to go to SA to do a full DMM workshop in August. While there I offered to do a workshop with them and they are eager for more training, but August happens to be a very busy month for them and they were not sure how they could work it in. They were glad I suggested that Cephas Kwaambiliwa could go with me to co-facilitate the workshop. Cephas is a Congolese brother who lives in Kigali and has growing DMM movements in Rwanda and in Congo.

Overall, aside from illness, I don't think I could a have planned a better way to get to know these brethren on a broader and deeper level. Since I was given no treatment other than rehydration medicines and vitamins, I can only praise God for His healing of my body. I am eating better and gaining some weight, though hopefully not too much. I do have a ways to go to get my strength back and still need to rest some during the day. Thanks so much for your prayers throughout the past month.
Posted by Sam and Nancy Shewmaker at 5:32 AM No comments: