We Can Do it Too!

One of the most vision-expanding experiences for those traveling with us this summer was to see Kenyan missionaries at work in Tanzania. They were active in ministries that include both urban and rural church planting, World Bible School follow-up, a weekly radio broadcast and a vision for a Christian school, to name a few. It dawned on our team, “Hey, we can do this too!”
When the team returned to Zambia they reported the highlights of our trip to the national annual lectureship. The enthusiastic response was, “Okay, how can we get involved?’

Significant Quote “On this trip you have come with the Shewmakers. Next time I want you to come with your fellow-Zambian missionaries.” – Tim Talley, missionary to Tanga, Tanzania.
Posted by Sam and Nancy Shewmaker at 7:55 PM No comments:

God has Wowed us Again!

Whenever Nancy and I make such a trip it is full of many imponderables and questions all along the way. We always have to pray for people of peace who will receive us or treat us kindly, give us advice, introduce us where necessary and show us around their area. We asked you to join us in praying for these blessings and it has been a joy to see God at work making provision for us in marvelous and unpredictable ways with many surprises. He has wowed us again!

In the last two weeks we have traveled with our Zambian friends to the north of Zambia by bus. There we boarded the Marine Vessel Liemba, a ship on Lake Tanganyika for the 4-day, five hundred mile journey to Bujumbura in Burundi. On board we learned that our ship would not travel all the way and we would have to stop off in Kigoma, in Tanzania overnight and look for another ship. In the harbor, we ran into the first engineer of the Bwiza. He offered us passage on his small cargo vessel, a sixteen hour run to Bujumbura.

In each of the new countries we traveled, we had to deal with new and unfamiliar languages, customs and currencies. Finding accommodation, changing money, negotiating transportation arrangements around the towns all had to be worked out through tedious attempts at (and breakdowns of) communication.

As one of many examples of God's provision of unlikely and unknowing angels, we found a young man named Cyprien checking his email in an internet cafe the day after we arrived in Buja. He had lived and studied in Canada for 14 years and had his own software company. When he noticed that we spoke English he immediately introduced himself, began translating for us and assisting us toward our goals in other ways. He borrowed his sister's car and became our driver for the next two days, introducing us to religious leaders and officials that helped us learn about missions needs and opportunities in the Burundi, even advising us on evangelistic strategy for planting churches though he did not claim to be a Christian himself. By the end of our three days in Burundi we had people calling us and coming to where we were staying to visit with us, including someone from the university and another from the ministry of finance, encouraging us to send people to serve in that nation. The timing of our visit there came just after the signingof a peace agreement that many are very hopeful will signal the end of a 12-year ethnic conflict.

Your partnership in prayer is vital to the success of what we are doing this month. The development of our mission here in Rwanda is unique in my experience in Africa. In less than one year, God has provided a legal registration and local governments around the capital of Kigali are offering us land for churches and other ministry development. The government estimates the cost of this land at under $1000 an acre even in strategic locations in the city. All this has occurred before even one church has been planted by our people. Praise God for his provision and grace!
Posted by Sam and Nancy Shewmaker at 3:21 PM No comments:

Nancy and I are in Lusaka, Zambia gathering our team for an overland mission journey into the heart of Africa. Praise the Lord that on Friday he provided the passports for the Zambian brother and sister that were lacking them.

Our plan is to take a bus to Zambia's port town on Lake Tanganyika (the longest and second deepest lake in the world). We should board ship this on Friday afternoon and reach Kigoma, Tanzania on Sunday morning. There we will survey the town and district for mission possibilities and then find land transportation if possible to Bujumbura in Burundi. We have no missionaries in Burundi, so we will survey the prospects for one or two teams to enter that country. From there we will take a bus to Kigali, Rwanda.

Please pray for 'men of peace' (Luke 10) along the way to be advocates and guides for us in places where none of us know the languages or the laws and conditions in the countries we are going for the first time.

Pray that God will give us 'spiritual eyes' to see the realities and needs that call for the mission of God in those places and in the hearts of the people we meet.

Some of you have been aware that we have to been planning and praying that we would be able to accompany three prospective missionaries, Nathan Holland and Danny and Katie Reese on a survey trip in Angola this summer. God's answer to all these prayers for the Shewmakers is: Not Now! We have run out of time waiting on the necessary documents from Angola.

However, we would request that you keep praying that the door will open for the others to get their visas. They have a plan B that will allow them to leave two weeks later and we are praying that God will open that door of opportunity.
Posted by Sam and Nancy Shewmaker at 5:06 PM No comments:

BY ERIK TRYGGESTAD Tall, slender and unassuming, Rwandan President Paul Kagame spoke softly about rebuilding his country and investing in its key assets — the Rwandan people — during a recent visit to Oklahoma Christian University.

It was hard to envision Kagame, 48, as a military commander who served in a revolutionary army in Uganda and later led the Rwandan Patriotic Front to end the 1994 genocide in his home country.

But Oklahoma Christian President Mike O’Neal compared Kagame to liberators such as George Washington and pledged his school’s support of Rwanda’s education goals.

“This is a family of faith,” O’Neal told Kagame after a question-and-answer session with the school’s students, faculty and visitors from other states and the United Kingdom. “We want to be your friends and brothers, as we are all God’s children.”

Kagame thanked the school for its decision to “actively support our drive toward our vision.”

“Oklahoma Christian is an institution known for academic excellence, anchored in Christian faith ... and service to its students,” he said.

Kagame, who won a landslide victory in 2003 to become Rwanda’s first democratically elected president since the genocide, visited the 2,000-student school after attending an education conference in Montreal, Quebec. Kagame accompanied his wife, Jeannette, Rwandan ambassador to the U.S. Dr. Zac Nsenga and a number of cabinet members from the African nation.

The president answered questions from students about how Rwanda is promoting unity after the devastating, ethnically charged genocide that claimed an estimated 800,000 lives 12 years ago. Kagame’s government has attempted to redraw lines of political districts and downplay the distinction between ethnic Hutus and Tutsis that sparked the conflict.

One student asked what steps the president has taken to avoid the corruption that plagues other African nations. Kagame said that Rwandan law now requires everyone — including the president — to disclose their income and its sources.

"Corruption has been a very serious problem in countries on my continent," he said. "It has hindered economic development in other countries and we recognize that."

After speaking at a luncheon and receiving an honorary degree from the school, Kagame addressed a joint session of the Oklahoma Legislature and met with the state’s governor. Gary Bishop, president of church-supported World Bible Translation Center in Fort Worth, Texas, and his wife Donna presented Kagame and the First Lady with embossed Bibles.

Kagame said he chose the school as a stop during his visit to North America at the invitation of O'Neal, who visited Rwanda in November 2004.

Richard Lawson, an Oklahoma Christian graduate and founder of St. Paul, Minn.-based Lawson Software Inc., and his wife, Pat, made initial contact with the Rwandan government and invited O’Neal and his wife, Nancy. Dave Jenkins, then a visiting missionary at the school, joined the group.

Jenkins now serves as the first full-time missionary from Churches of Christ to Rwanda. From his home in the capital, Kigali, he read reports of the visit in Rwandan newspapers. “The Lord is doing something far beyond what any of us could anticipate,” he said in an e-mail message from the African country.

In the summer of 2005, 12 students worked as a mission team to Rwanda. Six more students will travel there this summer, accompanied by Oklahoma Christian faculty members Bryan and Holly Hixson. David Johnson, a faculty member at Faulkner University, Montgomery, Ala., and his wife, Marlea, will teach in Kigali this summer. Kyle and Luz Beard plan to move to Rwanda as missionaries later this year.

Sam Shewmaker, longtime missionary to Africa and facilitator for African church planting for Missions Resource Network in Bedford, Texas, offered Kagame “a belated — though deeply felt — apology that the government of the United States did not come to the aid of the people of Rwanda in their darkest hour.” 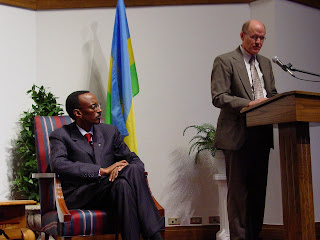 “This fact is a stain on our national honor for which we are deeply sorry,” said Shewmaker, who has visited Rwanda and plans to assist church members in future mission work there.

“We look forward to a harmonious working relationship with Rwanda that expresses Christ’s spirit of compassion and service,” he said.

The Rwandan president said that he hopes the scholarship program will be the first step in ongoing cultural exchanges between the Christian school and his country.

“We in Rwanda value these continuing contributions,” he said. “We trust that this is only the beginning of the road that we are to travel together.”
Posted by Sam and Nancy Shewmaker at 10:47 AM 1 comment: