A Different 4th of July

Yesterday was an interesting and different kind of 4th of July for us. While some of the rest of our team went to the U. S. embassy for the annual luncheon and games there for Americans in Rwanda, Nancy and I attended the Rwanda Liberation Day ceremonies at the national Amahoro Stadium. A friend had given us a special invitation to the celebration. The special program was commemorating the 15th anniversary of Liberation and the ending of the genocide against the Tutsi people. It was quite a moving experience to watch and listen to the singing, the parades of the army and the police, the bands, the national ballet, etc. 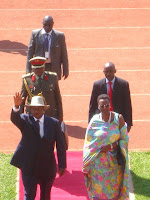 For us the highlight of the day was hearing the speeches of those Rwanda was honoring for supporting them during the war to liberate Rwanda and stop the genocide (1990-1994). The honorees included the widow of President Julius Nyerere of Tanzania, President Zenawi of Ethiopia and President Yoweri Museveni of Uganda. Some of these were African leaders whom we have heard of and read about for years. It was historic to hear them recount what happened as they helped each other lead their countrymen to break free of the indignities of colonialism and succeeding despotic regimes.

We are really proud of what the Rwandan leaders are doing to stabilize their country, repatriate all Rwandans refugees, put Rwanda on a track for greater prosperity in the future. It will be a long road, but they are determined and we honored to join hands with our friends to make whatever small contribution we can to the task of spiritual and physical reconstruction. It is a time of hope in Rwanda when it seems there is not enough hope to go around in Africa.
Posted by Sam and Nancy Shewmaker at 12:15 PM No comments: