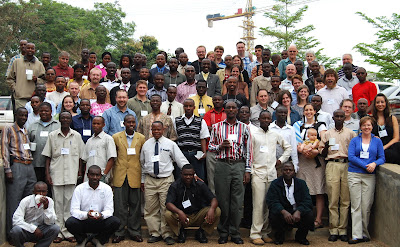 In our time in Rwanda, I would say that August 'was the month that was.' And the third week of August was the week that was. I think the week-long training workshop in obedience-based disciplemaking had a tremendous impact on at least ninety-five people from 19 countries who met in Kigali, Rwanda.

Sentences like, 'Unbelievers do not want your religion' and '...we don't do personal evangelism...' or 'The two greatest killers of church planting movements are paid pastors and church buildings...' challenged us to the core and forced us to 'unlearn' many of our cherished opinions and practices. The teaching text is the Bible only, not the Bible plus. After the first day of the workshop, Peter Donkor of Ghana said, "I am here for two purposes: 1) to unlearn ineffective practices and 2) to learn a better way.

From the planting of the fresh seeds of disciplemaking the way Jesus taught his disciples, may God by the power of His Spirit bring forth abundant fruit all across the Bright Continent.
Posted by Sam and Nancy Shewmaker at 9:43 AM 1 comment:

You'll be Safe if You are Covered in the Blood

Yesterday was one of those 'heavy days' among my experiences here in Rwanda. When we have guests and there is enough time, we try to give them feel and and taste of where Rwanda is right now...how the people feel about life, hope and the future. Usually at least one stop is a memorial site. Dottie Schulz and Dale Hawley have been visiting and I took them south of Kigali to the Catholic Church of Nyamata, now an official genocide memorial site.

The dark and dusty blood-stained clothing of thousands of people is still stacked in piles on the pews of this church that would seat perhaps 400-500 people. Nearly 7000 people were slaughtered in this now serene silent sanctuary; another 4000 were killed on the grounds surrounding the building. Thousands of bullet holes riddle the corrugated iron roofing sheets.

Our guide for the tour of the site was Charles, a young man about 23 years of age, who speaks very good English. He began by thanking us for coming to visit Nyamata. He said, 'you have come from far because you understand the value of life, and yet very few Rwandans visit this place to see what happened here.' Charles wanted to tell us part of his story. He said, "Sometimes I cry when I tell my story, but I am not traumatized." Charles was an eight-year-old boy on April 7, 1994 when the killers came to Nyamata Church. He and all of his family had come to find refuge in the church.

Most of the people in the building were killed that day. Others lay mortally wounded or tried to bury themselves among the bodies so as to appear dead. The blood of the dead flowed forward toward the altar and stood in pools. Charles' older brother forced him to lie down and 'sleep in the blood.' "You'll will be safe if you are covered in the blood," he said as he splashed blood over the little boy, who then lay there asleep for hours. The next day the older brother found that their mother, father and Charles' twin brother had all been killed just a few feet away. 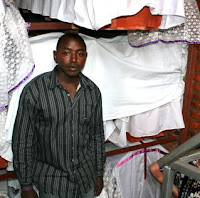 Before we left Charles thanked us again for coming to pay our respects to the dead and to listen to what happened at Nyamata. And we thanked him for exposing himself again to the many painful memories of his past as he has re-told his story to perhaps hundreds of people over the years.
Posted by Sam and Nancy Shewmaker at 10:01 AM 1 comment: