We had a fast trip to Africa this month that has been very positive in many ways.

1) The first two days we led a church leadership workshop at the Meadowlands church in Soweto.  Jay took the lead in teaching the content and I supplemented that by facilitating DBS's of relevant passages.  Attendance was relatively small as we were there Wednesday and Thursday and many that wanted to attend could not take two days off work.  Some of the young leaders were deeply impacted by the training and the way we presented it.  We met Napoleon Webster from Lesotho.  He loved the interactive nature of the DBS processes and principles and lobbied hard for us to do a training in Maseru, the capital of Lesotho.  Nancy and I stayed in the home of one of the elders, while Jay stayed with Dalton and Moreen Mushiinya, one of the deacons.  I will let Jay fill you in on his very positive conversations with Dalton.  There seems to be growing interest in MRN's 4-lab Church visioning process among some churches in the Johannesburg/Pretoria region of South Africa.  We had to hold back from too many commitments and raising expectations too high for what we could do in the short-term. 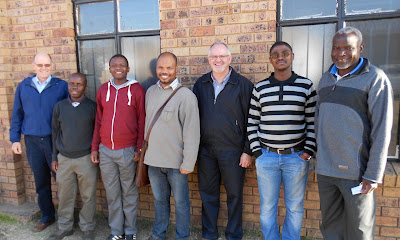 2)  On the Friday of the first week, we held a two-hour workshop with Nations University students and alumni at the Downtown church in Pretoria.

3) Saturday we led a 6-hour workshop for church leaders in Gauteng province and from Swaziland.  Jay did most of the training and again I facilitated a DBS at the beginning and at the end of the day.  We had very positive response from these leaders and requests for us to return for more training with them in Swaziland and Gauteng province.  Nancy facilitated some Bible lessons for a few women from Seeiso Street church and Mamalodi Church of Christ.

4) On Sunday, August 5th we flew to Livingstone, Zambia, my hometown.  We toured the Victoria Falls that afternoon and the next morning we had the opportunity to visit with Jacob Sianungu, visit his orphans' home and the site where he is preparing to construct a church building for a new church plant.  That afternoon we took a bus to Namwianga Mission at Kalomo where I grew up.  One of the missionaries put us up overnight and organized the Harding U.  HIZ (Harding in Zambia) bus to take us and a number of Zambia church leaders to Lusaka, the following day, where we checked in at the Gospel Outreach Center, venue of the 6th Africans Claiming Africa for Christ conference.  The theme was Extending the Frontiers of African Missions.  20 African nations were represented in addition to the U. S. and St. Vincent island in the Caribbean.  An exact count of participants was not announced, but we estimate close to 200 including about 12 Ghanaians, 35 Nigerians and 15 South Africans.  We were disappointed that so few Zambians participated other than those hosting us.

5) I was very excited by conversations with a couple of brethren from Cape Town, South Africa who are eagerly getting involved in DMM and house churches.  I had good chats with representatives of Mu slim majority nations on the frontiers of Islamic Africa.  They all bought the Miraculous Movements book and requested training in disciple making.  Hopefully we can arrange this for early next year.  I also had good discussions with the 6-person delegation from Mozambique who are seeking help to develop a mission training school so they can send missionaries to all provinces of their nation.  I was able to video testimonies of three men whose stories I hope to publish in Volume Two of A Great Light Dawning: Profiles of Faith in Africa.   I had numerous individual conversations that reflect a growing spirit and vision for missions not just Africa-wide but globally.

6) I presented a keynote speech on New Frontiers of God's Mission in Africa on Saturday, August 11.  Jay has encouraged me to frame the main points as MRN blog posts.

7).  At my request, Dr. Evertt Huffard has offered to do special cut-rate tours of the Holy Land in the summers of 2013 and 2014 for African church leaders.  We advertised the tours at the ACAC conference.  Approximately 70 people signed up as interested in taking the tours.

8).  The ACAC continuation committee members present met and heard a request from Henry Huffard of World Christian Broadcasting to sign a letter WCB would compose requesting the Minister of Communications in Madagascar to approve the licensing of WCB to operate from Madagascar.  The committee agreed to sign the letter.  The committee also entertained offers from several African Nations to host the ACAC Conference in 2016.  It was decided that Senegal will host the conference in 2016, symbolically on the Frontiers of the gospel in Africa.  The Ghanaian leaders volunteered to assist in the hosting of the 2016 conference.  Senegal will be the first French-speaking country and the first Mu slim majority country to host an ACAC conference.
Posted by Sam and Nancy Shewmaker at 11:25 AM No comments: