Yesterday we held a second anniversary celebration of the Xtra Mile Ministry, one of our programs under our Africa Transformation Network, NGO. On the program along with songs, prayers of thanksgiving and several speakers, were representatives of the ministry from various districts in the Rwandan countryside. Mostly these were young people in their 20s who are leaders or prospective university students in Xtra Miles' education program. Many of these young people are sole surviviors among families of six to eight parents and siblings. Others have one or two siblings who survived with them.

Various students were given two or three minutes to talk about their experiences with Xtra Mile. Some of them talked of how unimpressed they were at their first introduction to the Extra Miles leaders. When they heard that ATN was coming to their district they expected 'big people' to arrive in a Landcruiser dressed in suits and other accoutrements of big money with the promise of well-financed programs. When Charles Kabeza showed up in work clothes after a long bus ride saying that he represented a small NGO that had 'a big heart and a small pocket', they were quite disappointed. They expected failure and that his words and plans amount to nothing. 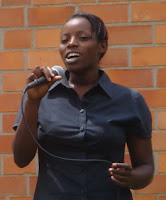 Now months later, after numerous visits, discussions, seminars on hope and leadership training, these young people had begun to develop a vision for their future. For me, the classic line of the day among the speeches came from one of the young women who stated that she 'will no longer put her trust in suits, but in the power of God.'
Posted by Sam and Nancy Shewmaker at 1:55 PM