A Great Send-Off for a Rwanda Mission Team

It is with great anticipation that Nancy and I await the arrival of what has been dubbed the Rwanda08 mission team. I was privileged to be present at Richland Hills Church of Christ on a Wednesday night two weeks ago for the presentation of all the RHCC missionaries on furlough or about to enter the field for the first time in long-term missions. They were prayed over by Duane Jenks, the minister of missions.

Ten days later, on Harvest weekend, the missionaries were again prayed over as the congregation gave and pledged toward an overall goal of $1,278,000 for missions in 2009. They reached about 80% of their goal that weekend. 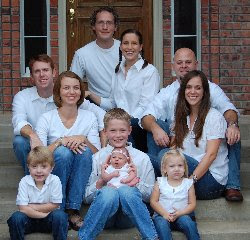 Most of the team expect to arrive in Rwanda in early December, 2008, followed three weeks later by two more missionary families who have been serving in West Africa for about 10 years.
Posted by Sam and Nancy Shewmaker at 3:43 AM

We're praying for all those involved.

Look at those precious babies... what a blessing!