Twenty-six church leaders and evangelists from five nations of west Africa made their way to Dakar, Senegal mostly by taxi or bus arriving Saturday, February 2.  We worshipped together on Sunday and rested from our travels.  Our workshop facilitating team and some of the participants were hosted by some of the employees of Douglas Boateng's company here in Dakar.  They have been great hosts and servants, cooking our meals, doing laundry and cleaning our rooms.

The workshop was five days long but not long enough to do what would have like to cover because of our linguistic handicaps.  About 1/3 were most comfortable using English, the other 2/3 needed French translation, so what with questions and 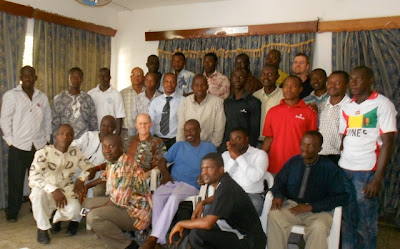 
One main deficiency in the program was the lack of women in the workshop.  Mustapha says that is generally true in a lot of church programs in west Africa, something that we need to seek to overcome.
Yesterday, Arnold Dzah, the Ghanaian missionary here, director of the Bible School and our host for the workshop, took us out to a rural church 120 kms from Dakar.   Peter Ofori, missionary from Mali preached and the rest of us shared parts of the worship program.  There are seven churches of Christ that have been planted over the past 20+ years; the one we visited is the only one with a building besides the church in Dakar.  The assembly yesterday consisted of maybe ten adults and 90-95 children and teenagers.  But since most churches do not have their own buildings maybe they will be better set for a movement of house churches ...

We arrived in Cotonou, Benin on February 11.  George Akpabli met us and took us to the Livingstone Restaurant that is popular with Western residents and visitors.  Then we stopped a local grocery to pick up some breakfast supplies before heading out to the Bible Training Center just north of the city of Cotonou.  The school has a very nice well-fitted out guesthouse where we stayed.  George and Joyce hosted us for the lunch and evening meals all week. 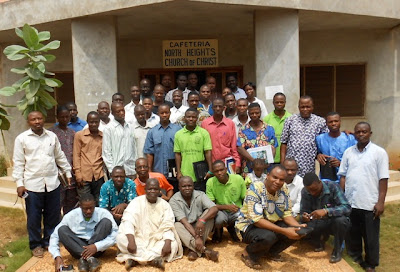 By Tuesday morning, most of the preachers who were able to come had arrived from churches across Benin as well as at least one from Chad, Ivory Coast and Guinea.  It was clear that the disciple making movements approach to evangelism was a strange and somewhat difficult paradigm to accept.  We felt significant 'push-back from participants in the first two days of the training.  Questions often focused on how we would deal with various doctrinal issues.  To stay focused on the topic, we had to limit questions.

On the morning of the third day, my co-facilitators and I felt a spiritual burden and resistance to our message, calling for some deep, fervent time in prayer.  During that day, we felt a significant spiritual breakthrough with open minds and hearts.

By our closing time on Friday, I was pleased to hear from the George, the Bible School director that he would like to adapt and incorporate the content of the training into the curriculum of the Bible School and to encourage its practice in the churches in Benin.  In his report, he stated that 'every participant in the workshop is going home a different person.'  Our prayer is that this kind of impact will be reflected in the people, churches and communities of Benin and all of West Africa.

Posted by Sam and Nancy Shewmaker at 2:31 PM